The young spirits joined hands in dancing and reflecting on society through their bodies and theatrical devices at the opening night of the second edition of the International Festival L’Union des Ecoles in Limoges, the central west of France, on Wednesday.

Sixteen local juvenile talents were introduced to the audience in the grand hall of Theatre of the Union to present the latest work of the juggler-choreographer Elsa Guérin. Like the title suggests, La Condition Collective reflects the state when people interact with one another. It could be difficult as individuals are different, but one can learn to work together harmoniously.

This theme was portrayed throughout the play, especially in the war-like scene where red light shone along with dark music, all students-actors looked rigid forming a group while balancing a ball in their heads before they fell and rose repeatedly. The act later transformed into a softer routine where actors were smiling while forming two lines and circling each other which looked like flower petals in a flow. Despite all the differences, everyone can be synchronised, just like how people come together at this festival.

The 45-minute-show was not mediocre to watch. The choreography tried to let the students-actors explore their abilities through transformations and improvisation. Still, many actors should train more to convey their body language to the fullest.

As for the second show Façon d’Aimer (Way of Loving) from Burkina Faso was staged by a sole actress who delivered monologues for an hour, reflecting a life of a woman who killed her husband and his white wife. Intended to portray the voices of the left-handed murderer, her parents, her husband and a judge, Victorine Sawadogo failed to convey the characters’ differences. And although the synopsis states that the main character is a left-handed, the acting was still dubious about that fact.

Although the story reflects a woman’s perspective, it is written by a young male talent, Aristide Tarnagda. Not only portraying a tragic life of an African woman who was abandoned by her beloved husband, Façon d’Aimer also questions about verity.

Despite my limited knowledge of French, the play reflected that being African is inferior to any race in the world, as the tragic character said that they own no land, no sea, nothing, even the truth or their own life.

Being treated badly and asking nothing for their rights seemed to be their only option, especially for women who are already oppressed by social norms. To make it worse, they barely could choose the love of their life or their way of loving as the law still authorise polygamy, given men superior power over women.

By being left-handed and couldn’t lift her right hand to swear to tell the truth in front of the judge, the main character not only reflects that she has no “rights” in this country, but also conveying her resistance to conform to the unfair regime ruled in favor of men.

Art and culture aficionado who thinks, observes and writes about things 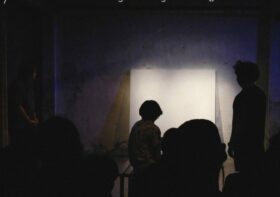 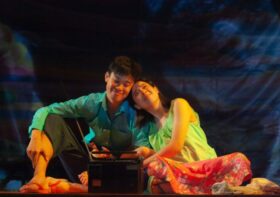 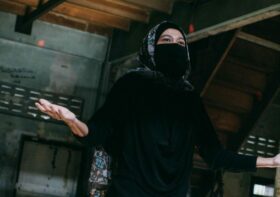